“They say it takes a village… and while that may be true, sometimes it takes an army of men to bring a boy beyond the shadow of adolescence into the harsh daylight and truths of adulthood. ‘Warrior Rising’ is a book for our times.”

” When MaryAnne described to me the rite of passage she had created for her own son who she is raising on her own, I was moved to tears. I wish I’d given my son a Black Mitzvah. When thinking about all of the incredible men it was an honor to work with throughout my years in the music business, all who could have personally shared their own life lessons with him, I can only think of the tremendous added value it would have brought to the successful man I’m so proud to call my son. I recommend it for every father, regardless of race, culture or religion.”

“MaryAnne Howland’s poignant and powerful story of the birth, delivery and raising of her son with cerebral palsy is a milestone in developmental psychology literature. The range of emotions I felt about her and Max’s trials as a mother and son gave me a small glimpse into what a parent of a child with a disability might feel. Read this book once, twice and then pass it on to parents and educators who want to understand what infinite love is all about. A true triumph. ”

“At a time when it is sorely needed, Warrior Rising inspires hope and offers a roadmap to raising our young men to more than survive, but thrive as confident and successful community builders and leaders. MaryAnne provides us with a close up and personal story that illuminates the role and impact we as men have on the future of all of our sons, and our daughters as well.”

“As MaryAnne Howland reminds us, “It takes a village to raise a child.” But it takes a child to raise a village. How many adults hear and understand the calling of youth today to be initiated? So they learn not only the rights and responsibilities of adulthood, but come to know the psychic death and soul rebirth necessary to accomplish that transition? MaryAnne Howland heard the call, rose to the challenge, and blessed us all with a roadmap. ” 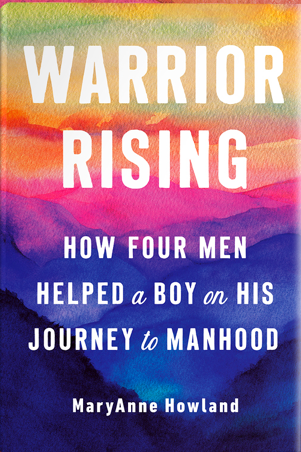 “She calls me her “miracle” and so every birthday is a huge celebration. But my Black Mitzvah for my thirteenth birthday was the best one of all.”

An eye-opening look at one mother’s determination to provide positive male role models for her son, and the power of great mentoring to change lives.

When MaryAnne Howland’s son was turning thirteen she organized a “Black Mitzvah” rite of passage celebration for him. Max is one of the one-in-three children in America being raised without a father in the home. Among African-Americans, that number is reported to be as high as 72 percent. To help fill the father-shaped hole in Max’s life as he transitioned from boyhood to manhood, MaryAnne invited four men from different corners of her life –an engineer, a philanthropist, a publisher, and a financial planner–to become Max’s mentors.

Max has faced many challenges. As a boy without a consistent father figure in his life, as an African-American male in a time when race relations in this country continue to be fraught, and also because Max was born premature and as a result has cerebral palsy, he has had to be a true warrior. On the brink of manhood, his mother wanted to give him the benefit of men who could answer some of the questions she felt that she, as a woman, might not be able to answer. Through his adolescence, Max’s mentors have shared valuable insights with him about what it means to be a good man in the face of life’s challenges. These lessons, recounted in this book, will serve as a powerful roadmap for anyone wishing to support boys as they approach manhood.

First and foremost, MaryAnne Howland is a proud mother and advocate for persons with disabilities. She is a communications specialist and the owner of a portfolio of social enterprises that fan the mission of equity, inclusion and sustainability. They include Ibis Communications, Global Diversity Leadership Exchange, and THIS!, a new fashion line for all body types. In pursuit of advancing understanding of cultures and our common values, she has also worked as a travel writer/researcher for Fielding’s, Open Roads, and Black Enterprise Magazine. A servant leader, she sits on the board of the American Sustainable Business Council based in Washington, DC. With this book, MaryAnne has founded blackmitzvah.org to fuel the movement to traditionalize rites of passage for boys and girls, and to support a community dialogue about parenting and mentorship. Born in Cleveland, Ohio, MaryAnne is a graduate of Boston University School of Communication, and serves the world as a global citizen from her current residence in Tennessee. A recipient of many awards, she considers being named a Working Mother Magazine’s Advertising Working Mother of the Year her highest honor.

Listen to WARRIOR RISING in Soundcloud

More coming in 2021. Stay tuned for the re-release!

I first heard of the idea of a “Black Mitzvah” from a friend many years ago who used the term to describe how she had enlisted some very special men in her life to mentor her son. I was intrigued and could immediately see the value of this kind of group parenting. So I borrowed and expanded upon her idea to create a celebration that would forever imprint the commencement of my son’s journey into manhood. As I began to design my son’s Black Mitzvah, I remained focused on the idea that it would be a creative expression of love, learning, mentorship, and community. As it turned out, what began as a celebration has turned into a life-long commitment from four men – warriors for just us.

The Black Mitzvah is a rite of passage for young people to instill confidence, self-esteem and moral values in every child. The idea has spurred a movement. No matter whether you are single, married, Black, White, Baptist, Buddhist, Muslim, Atheist, or however you identify, we are all part of a community and we can all help each other raise our children and should. As the saying goes: “It takes a village.”

Welcome to a new community of parents and mentors committed to raising the next generation of leaders and global citizens.

Create your own Rite of Passage

Customizing ceremony to suit your child

Start with these 3 questions:

What are the goals of the Black Mitzvah? What is the vision that you have for your child’s future?

What tenets/teachings do you believe are important for the foundation for your child’s growth and development?

Who are the men and/or women in your family/community who you most admire, trust and respect?

Learn more about the Ask, customizing your child’s celebration, and defining the roles of his/her mentors in THE PAGES OF Warrior Rising.

For more information about your own Black Mitzvah or other questions, email MARYANNE HOWLAND

Order your copy of Warrior Rising today and join the movement

Sign Up For The Warrior Rising Mentorship Masterclass Series

To register for the Mentorship MasterClass, purchase your copy of Warrior Rising: How Four Men Helped a Boy On His Journey to Manhood and enter your contact information below.